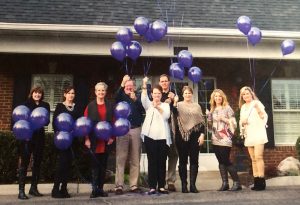 Three balloons were released prior to the celebration honoring Dr. Robert Acker, Dr. Joe Acker and Dr. Leslie Acker. After the balloon release ceremony we proceeded downtown to the Medical Arts Building to tour the building where Dr. Acker practice first originated. Our evening ended at the Sunsphere for dinner and remembrance for these wonderful dentists. The tables were also decorated with vases holding 3 red roses in remembrance.

Surviving the first five years is challenging for most businesses, let alone operating for 25 years or even 100 — through the Great Depression and two World Wars.

This year, Dr. Mark Evans is commemorating the roots of his dental business. They extend all the way back to 1915 when Dr. J.E. Acker Sr. started his Knoxville dental practice.

He practiced until 1974, and then his son, Dr. Robert Acker, came out of World War II and in 1947 started practicing in the same office in the historic Medical Arts building.

In 1974, the dental practice moved to Cedar Bluff. Dr. Evans joined the practice in 1988, purchasing the business from Dr. Robert, who stayed on to share his experience until 1990. Dr. Evans later moved the practice to its current location on Executive Park Drive in 1995.

This year marks the 100th anniversary of the dental practice’s origins, and with the recent death of Dr. Robert at the age of 94, Evans feels it is a good time to reflect.

“At Christmas when my uncle Joe came back from his time at dental school, my dad said to his dad (my grandfather), ‘You know Dad, I spent all day working dirty on locomotives and all night getting clean. If you would send me to dental school like my brother, I’m ready to go.’”

Each of the brothers had his own office, according to Dr. Jim Acker. There was a small corridor between, a waiting room and a little X-ray room that was filled with a dental chair and X-ray machine. That’s where Dr. Robert practiced after he served in the U.S. Navy Dental Corps as a lieutenant 1942-47 in the Pacific.

“I have a cabinet that my father had in his office, just a rundown piece of wood that I keep in my workshop to keep nuts and bolts,” said Dr. Jim Acker. “It always had the aroma of antiseptics; you can smell it when you walk in the door.”

Dr. Jim recalls visiting his father’s and uncle’s office as a child and playing with the mercury used in the old amalgam (silver) fillings.

Dr. Evans recalls Dr. Robert relating stories of the dental practice’s early years. “Dr. Bob told me that during the Depression, things got pretty tough,” he said. “Dr. J.E. took whatever people could afford, and that wasn’t always money. He’d get eggs and produce or even a chicken.”

Dr. Jim Acker also recalls hearing that Dr. J.E. once bartered a set of dentures for approximately 16 cemetery lots for his family.

Around 70 years ago, when Jack Hammontree was 4 or 5 years old, it was a bigger thrill to ride in the elevator to see Dr. Les Acker in the Medical Arts Building than it was to visit the nearby Miller Department store, said Hammontree, a former Knoxville chamber president and CEO.

“I do remember that I was always impressed as a child with all of that woodworking and the elevators at that time,” he said. “They weren’t self-operated. They had someone who operated them. Miller’s downtown only had three or four floors, but (the dentists) were on the seventh floor. It was twice as much.”

The historic Gothic Revival building on Main Street was originally planned to be 13 stories high, but was reportedly scaled back to 10 stories because of the Depression. The building was home to many dentists and physicians.

When Dr. J.E. Acker retired, Dr. Robert became Hammontree’s dentist until he retired. The other memory that stands out for Hammontree was a large portrait of Dr. Robert taken in his Navy uniform.

“They were so proud of his service,” Hammontree said.

Over the years, Hammontree would see members of prominent Knoxville families visiting the Ackers, including the Regas family. Later, Hammontree’s wife and his sons, who are now in their late 40s, would also visit Dr. Bob. They have continued to see Dr. Evans since Dr. Robert’s retirement.

“Just like everything else, the technology changes in dentistry are tremendous in the past 100 years,” Dr. Evans said. “We’ve gone from no anesthesia to now practicing pain-free dentistry. Dr. Bob would tell me about watching his dad making his own dental anesthesia by pulverizing cocaine.”

He adds that Dr. Robert told him that when his father and uncle started out, the fastest dental tools used to do 20,000 rpm, while today it’s more like 400,000 rpm.

Hammontree recollects that Dr. Les would use drills of that era that were very slow and noisy. “I remember hearing that Dr. Bob had a new drill and he (Dr. Les) said that something going that fast in your mouth, if it ever stopped, it’s liable to take your teeth off.”

He said his decision to take over the practice from the Ackers “was one of those things that felt right from the get-go. We just crossed paths at the right time, thinking about the time to start slowing down and getting out. I don’t think he wanted to practice as long as his dad.”

“He had all of these little signs up on the ceiling, where you’d see them in the dental chair; they would say things like, ‘Brush the ones you want to keep,’” he said. “They were all strong believers in prevention and taking care of your teeth, and were reluctant to do extractions.”

Dr. Evans’ patient roster includes many people who used to see Dr. J.E., then Dr. Bob, and have continued to visit his practice.

“Over my 27 years, I’m seeing third- and fourth-generations of patients,” Dr. Evans said. “We’ve tried to continue that patient-care model, (to) go above and beyond to make sure we help that patient keep their teeth their entire life.”